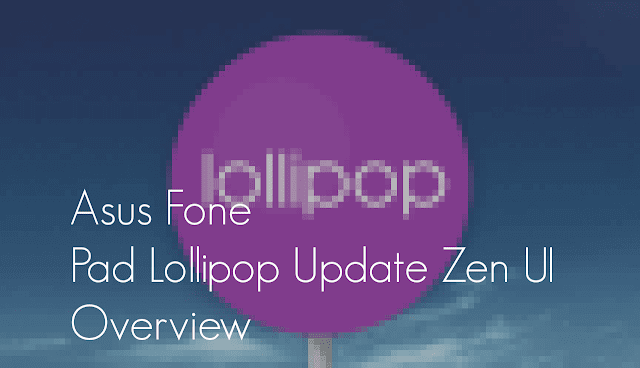 It’s been a week or two when I was suddenly surprised with a popup on my FonePad to Download and install the latest lollipop update. Asus have just surprised the users, by giving the official Android Lollipop 5.0  OTA update to its budget oriented Android tablet, Asus FonePad 7 (ME175cg).
This Dual-sim Tablet was launched with Android jellybean out of the box priced at INR 12,999. Asus promised to provide Kitkat 4.4 update, but there was never been a word about the Lollipop update for this budget Tablet.
Because even the expensive tablets and smartphones are not provided with latest android updates and users were also not expecting. It is the only android tablet from asus with Dual-sim functionality. The device has a 7-inch WSVGA (1024×600 pixels) display with 216ppi (Pixel Per Inch) density, which promises sharper display. It runs on 1.2GHz Intel Atom Z2520 Dual-core processor with Multi-threading technology, which works as Quad core processor and for Gaming it has PowerVR SGX544 GPU.
Coming to the camera, the primary camera is 5MP and front camera is 1.2 MP  without flash which can take some good pictures in Daylight. The phone comes with an 8GB internal storage (of which around 5GB is available to you) and expandable to 64GB with MicroSD card. A 16Gb of Asus Web storage valid for one year is given to you for free with this device. A 3950mAh battery gives you a decent standby time. And is one of the very few Tablets to get lollipop update.
The device is initially launched at the price of INR 12,999, but now it is available for under Rs 10,000 on E-commerce sites. Even it is launched in 2014, the new lollipop update makes it still a good choice to buy it even today.

How to Upgrade to lollipop

Overview Of ZenUI on New Lollipop Update on FonePad

As all the Asus devices run on its own customized ZenUI, with the new update the UI got even Beautiful and simpler to use. The lock screen looks beautiful with a clock, Quick apps. The screen can be unlocked by Swiping Up (instead of swiping to left). The new thing is it shows app notifications on the lock screen which can be opened with a double tap. And also when the device is being charged it shows the time required for it to completely get charged. You will get more customization options for the new app menu. You can set how many apps to display on the single page( Grid Size). The Grid size options are available from 4X4 to 6X6. You can simply set the grid size just by zooming in and zooming out.
The new smart group option groups the apps of the same category to one folder. For example Facebook, twitter buffer app into one folder and the games to one and so on. The Recent apps view was same as in stock android lollipop. The windows move smoothly. There are three buttons one to clear, one to pin apps and the other to view running apps.

The bad thing is that there is No Guest mode, which should be available for every device running Android lollipop 5.0 and above. But when I contacted Asus on this aspect, they told that there will be an update in future with Guest mode feature.
Tip: Asus included a new feature called High Contrast Text. Enabling this feature changes the font all over the UI with white or dark  borders around letters. It is given to help the people with sight disabilities.  But this setting really makes UI look unclean. So if you accidently enabled it, you can disable it by going to settings> Accessibility settings> High Contrast settings. Asus really gifted its fonepad uses with a great unexpected surprise in the form of lollipop update. And its really a good pick even today as there are only a few Tablets (mostly google devices) which will be getting lollipop update.

Have you Updated your Fonepad? What do you feel about it? Facing any problems? Please share your doubts, opinions and views via comments below.