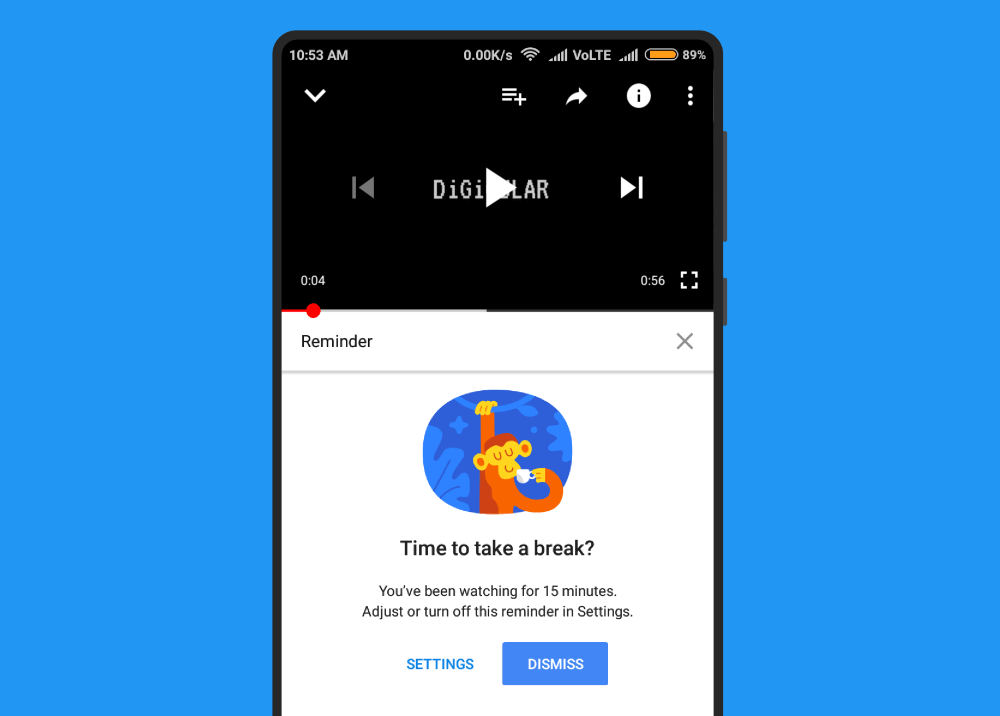 YouTube can be very Addictive even more than any Social networking website. You open youtube to watch a cooking recipe, the next thing you know you’ve been watching Gordan Ramsay’s cooking tips for 2 hrs straight without a break.

The problem is that you don’t know you have been watching that long. If there is someone to remind you that, you will likely stop watching and save your time.

So, Google introduced a feature into YouTube app, which is called “Take A Break Reminder”, as a part of its Digital wellbeing initiative to help you restrict yourself from spending more time on your Phone and Internet.

What is YouTube Take-A-Break feature and How it works?

YouTube Take A break is a Reminder feature, which will tell you if you’ve been watching videos for a lot of time and its time to Take a break.

Depending on your watching habits, you can set the reminder for 15, 30 , 60, 90 or 180 mins as per your choice and YouTube will remind you after that certain watching time.

How to Use Take a Break feature on YouTube App

You can Enable Take a break reminder option with couple of simple steps:

Now whenever you are watching videos continuously for more than the time you have set (say 15 mins), you will see a reminder on your screen with an option to either Dismiss it or change it in Settings.

So, either you can stop watching videos or just dismiss the reminder and continue watching. If you want to disable Take a break reminder, just tap on settings button in reminder (or Settings – General) and set the reminder to Never.

Conclusion : Is this feature useful?

As I was testing this feature, I found it quite useful. At first I felt a little annoyed see reminders again and again. But as I increased the time period, it was quite effective. I actually stopped watching videos sometimes and spent that time on important things. So, I think this little feature might be quite useful to you.

So, have you tried this Youtube’s Take-A-Break feature yet? Is it useful to you? Let me know in comments. Follow us on Instagram & Twitter for some exclusive stuff.