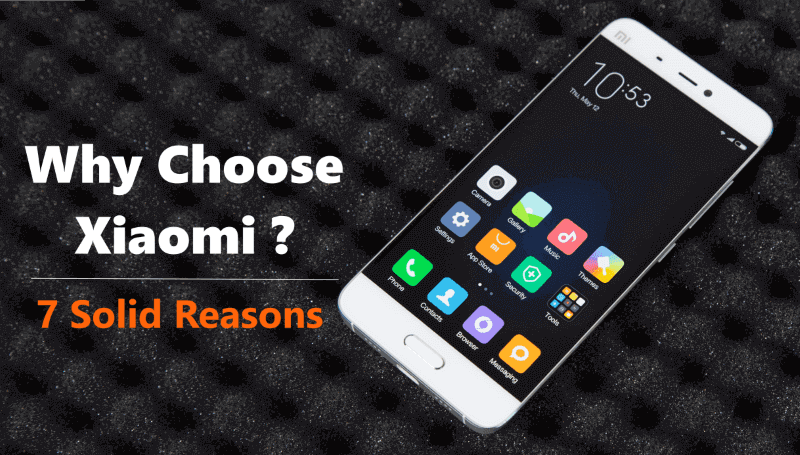 A couple of years ago, in 2014, Xiaomi launched its first device (MI3) in India. And when a friend of mine bought this then newly launched smartphone, I laughed at him for the reason it’s a Chinese Smartphone. Because till then, I’ve (and almost everyone) been fed up with cheap and faulty Chinese electronics that fantasize people of having things that it actually doesn’t have.
But, Xiaomi proved me INCORRECT. It actually worked. They make real smartphones, that are Reliable in Reality.
This is why, in just 5 years of its establishment, Xiaomi became the top smartphone manufacturer in China competing with tech giants like Apple, Samsung and Huawei by breaking the myth
Low Price = Low Quality

Well, that’s not all, there are some great reasons for why one should consider buying a Xiaomi phones, despite the existence of brands like Samsung Price is the most important factor, you would considering while buying a smartphone. Not everyone could afford an iPhone.
So, Xiaomi gives foremost importance to the pricing of its devices. Even its latest flagship smartphone Xiaomi Mi5 with premium features just costs under $400 (INR 25,000).
Because its always better to sell a $100 product to 1000 people than a $1000 product to 100 people.
But the cost never compromised the specifications of its smartphones. Xiaomi manages to sell the same smartphones with Great specifications at low prices, which other brands like Samsung selling at almost Double prices.

Why are Xiaomi devices so cheap?

Then a question arises. How can Xiaomi sell its smartphones at very lower prices, while other company’s cannot. Because…
This helps Xiaomi save a lot of money and helps sell smartphones at Unbelievably low prices. Processor– When I see low-priced smartphones, I realize most of them use the Low-quality MediaTek processors. But unlike other, almost every Xiaomi smartphone runs on a Snapdragon processors, which are considered to be the best smartphone processors.
Build Quality – The material used for both inner and outer build of Xiaomi smartphones is also of High quality. Believe me, I dropped my Redmi 2 prime quite a number of times from a decent height on back. But still it just had a few scratches and surprisingly no major damage.
Can you believe that a smartphone that costs around just $100 is built fully with Metal?  Xiaomi proved it possible with the new Redmi 3. As I already said Xiaomi uses high-quality hardware, the camera module is no exception. Whether it is a most affordable smartphone or the flagship, Xiaomi smartphones always had a decent to an excellent camera.

Even the $100 priced Redmi 2 which is regarded as the best camera phone in the price range can take amazing photos and record videos at 1080p resolution.

The Newly launched Xiaomi Mi5 ($400 or INR 24K approx.) even has an Optical Image Stabilizer which you usually find only in expensive smartphones like iPhone 5s or 6s, LG g4 and so on, which cost you more than $600 (INR 40K). Xiaomi which was founded in 2010 by ex Kingsoft CEO Lei Jun was started as a software company, providing a custom version of Android, MIUI. They were not smartphone makers initially.

MIUI gained huge popularity and been ported to a huge number of smartphones. This is for the reason, it has many features that the stock version of Android lacks.
In 2011, they began to make their own hardware and launched its first smartphone with MIUI on it. MIUI had been the base product and the strength of Xiaomi.

Why is MIUI so special?

There are certain things and advantages of MIUI that made it most popular custom ROM with a huge fan base:

There is bad reputation for most china products because they use low-quality material. But not all of them. I have to say it again, Xiaomi uses great quality hardware.
I have been using one of my Xiaomi smartphone for about a year and trust me I had never faced any issues, besides some heating problem which was later fixed by a software update. To take another case, the Redmi 1S which my friend using for nearly 2 yrs was still working without any problem.
To talk about after-sales service, I never walked into their service center because I never needed it. Xiaomi smartphones are often reliable. Unless you get a defective unit, you will less likely face any hardware issues.
But, still if you ever need service, there are service centers, which are increasing in number (in India)
If it a software issue, you can easily get a fix from the official MIUI forum. Xiaomi has a huge community of fans and developers, so you can usually get your problem fixed in no time.

6. No Warranty Void on Rooting This is truly unique about Xiaomi. You won’t lose warranty even if root your device. Unlike other smartphones,Xiaomi phones have unlocked bootloader.
So if you accidentally brick your device you can go to Xiaomi service center to get it fixed and you will be still under warranty. But do remember to stay on MIUI and not any other custom ROM.
Xiaomi was the first company to offer warranty even after rooting. The strategy was later followed by  an Indian smartphone maker called YU Televentures. The main aim behind this is to encourage developers.
If you are using the old MIUI v5 or v6 (Developer ROM), you don’t have to manually root your device, it is by default has an option to get root permissions. It is later discontinued in MIUI 7 global ROM, but it is still there in Chinese ROM.

Most smartphone makers ship their smartphones with some of their own or Third party apps preinstalled. Most of the times they cannot be uninstalled.
It is quite annoying to have those extra apps which we don’t use. They take up extra memory, extra RAM. We can call it as Bloatware.
Xiaomi phones come with only a few preinstalled apps like the Music app, which is very powerful and other basic apps like Browser, Notes which are quite useful.
In one word we can say there is actually No bloatware on Xiaomi devices, even the few apps installed are basic essential apps.

OK. But which Xiaomi phone should I buy?

Well, that completely depends on your Choice and Budget.

If you are on tight budget, consider buying the Redmi Series phones, which are budget-friendly and carry good specifications.

Redmi Note series is a great choice for those who love bigger screen phones as it usually comes with screen size of around 5.5″.

And finally, if you have want a high specced smartphone, MI series is the one that suits you.

Xiaomi smartphones have great specifications and performance and that said they very much affordable. If Xiaomi is selling Powerful smartphones at half the price of others, then why go for other brands?

So, being a Mi fan myself I strongly advise and recommend you to get a Xiaomi smartphones next time you want to buy a smartphone.